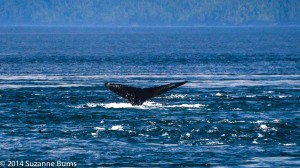 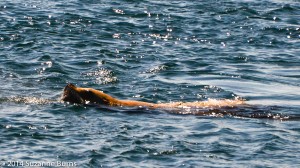 Mist rolled over the mountains this morning like dragon’s breath as we cruised out of Telegraph Cove.  Within minutes of our trip we saw our first blow of a humpback whale while watching several mature and immature bald eagles. We were able to identify the two humpbacks with the help of our on board naturalist, Kyle who referenced the MERS Humpback ID catalog (www.mersociety.org).

The first whale identified was ‘Argonaut’ and the other was ‘Slits’. Argonaut is so named as it has what looks like a capital ‘A’ etched into the left underside of it’s fluke. Slits is a newcomer on the scene, having been first spotted last year. Both whales appeared to be ‘logging’ i.e. spending lots of surface time resting and short dives of 6-8 minutes.

Rhinoceros auklets and murres were some of the other alluring avians we saw today. We even saw a small black tailed deer feeding high on the edge of a cliff.

Our afternoon sailing was a glorious combination of moody fog and brilliant sunshine with the animals providing us with tantalising glimpses into their worlds. Dall’s porpoises were repeat offenders and came along wake riding the Lukwa. The mist rolled in again and we initially tried to find ‘whales by braille’. By this, we took our time and listened carefully to the characteristic resonant sound the humpbacks make when they breathe on the surface.

The fog, thankfully, was not meant to be. We made our way towards the ever increasing blue and entered Blackney Pass. The water whirled and fumed as we sailed through, churning up all sorts of small creatures in it’s fury. Two whales were found to be capitalizing on this bounty, feeding furiously in the maelstrom. The two seen were identified by Sophia our naturalist as ‘KC’ and ‘Guardian’. KC  had been spotted approx.40km south yesterday so it made it all the more special to see this whale. We spent an hour here watching these behemoths weave their way through this whirlpool. An unexpected guest also joined the goodness and happened to be a minke whale which is known as ‘Bolt’. Bolt has been seen in this area since 2000.

Our guests were thrilled to see such a prolonged and wonderful sight of these whales feeding and diving. One couple called Phil and Tania from Gloucester, England fulfilled their dreams by seeing these gentle giants wild and free. Glaucous winged gulls, young and older sat and flew over the riffled water, unperturbed by all the activity around them.

At Weynton Island, a couple of harbour seals were precariously balanced on rocks. As we made our way back towards home, the wildlife kicked off in earnes.  Two Steller sea lions roared in the kelp, as some beautiful bald eagles flew above them. Two more humpbacks appeared close by, providing us with ample opportunities to observe and photograph them. Slits was one of the two seen again. We wrapped up our trip with a glorious cruise back to port. Life is good!