How to tell a whale from its tail 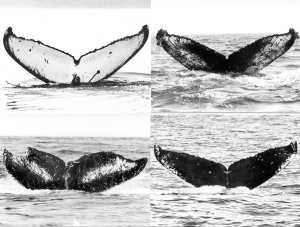 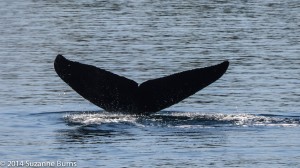 Humpback with dark ventral side to fluke 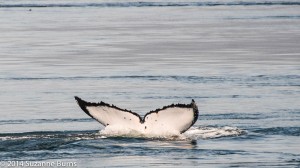 Humpback with mostly white ventral side to fluke 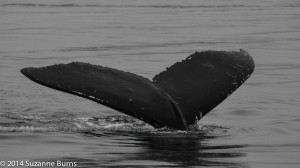 Dorsal side of humpback whale fluke which is quite similar in many whales and hence not used for identification. 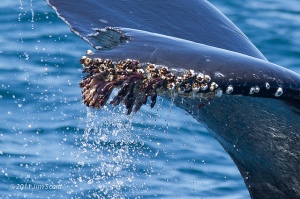 Humpback with dark ventral side to fluke

‘Yahtzee’ splashing its fluke repeatedly for over 10 minutes. No sign of orcas in the area, so unsure as to why the whale was making such a commotion!

If a humpback whale was to go through the rigmarole of American airport security, he would be presenting his tail to them for scanning. We as humans, usually have our retinas and fingerprints scanned to make darn sure that we are who we say we are. In other words, a whale’s tail is as good as his fingerprint for all the intents and purposes of identification.

A whale’s tail is also referred to as a fluke and it is a unique and very powerful piece of equipment. The fluke is the rudder, brake and propeller for the whale. It moves in a vertical plane, pushing the enormous whale through the water with powerful thrusts. As well as locomotion the tail is used for communication and protection. Whales sometimes slap the water in what appears to be jovial exuberance. At other times this repeated slapping is used as a warning to predators to keep their distance or incur a heavy penalty if you venture too close. A 40 ton whale with a fluke of 4m wide is quite literally a lethal weapon. You do not want to be on the tail end of an agitated whale. To do so is suicide or at the very least, partial maiming.

The whale fluke has become somewhat of an iconic image, being used in so many instances from jewellery to branding of myriad of products and services. On close examination of this impressive appendage, many interesting shapes and creatures are actually to be found living on this fantastic fluke.  Barnacles are commensal creatures that live their lives on their whale host. The barnacles can be helpful in identification as sometimes large aggregations are found on particular areas of the whale’s tail. The barnacles are an additional ally in a whale’s armoury. If a whale faces attack from a predator not only is the fluke an enormous aid, but the razor sharp coating of the barnacles will tear the skin of the whale’s foe. At times the barnacles will come off the whale’s fluke and the discolouration will also be useful in identifying the whale.

In Northern Vancouver Island, BC, a group of scientists, naturalists and whale enthusiasts have banded together to identify the humpback whales that spend their summers in the area. Each whale has had its fluke and also its dorsal fin photographed countless times. The best photos are used in cataloguing and identification of each humpback individual. Some whales have been named based in the fluke appearance. ‘Argonaut’ is so called because it has what looks like an ‘A’ notched into its fluke.  Another whale called ‘Yahtzee’ looks like it has a dice sitting on its fluke ready to roll. Lesions, scarring due to entanglements with fishing equipment, close encounters with propellers and predators all take their toll on the integrity of the whale’s fluke.

The underside of the fluke is used to identify the whale as the colours and patterns tend to be more highly variable on this side than on the dorsal surface. Colouration on the ventral side of the fluke can range from an almost exclusively white side, through to a mix of white and grey, while others are more uniformly dark grey. Some flukes have an almost frilled edge which looks like some very feminine patterning while others have an almost straight edge to their tail.  Combining these various attributes gives the keen eyed whale identifier plenty of information to figure out who is who.

This non invasive method of identification has done wonders for getting real data on whale populations and social dynamics. Incredibly with the humpback whale alone over the past decade, the numbers of whales in Northern Vancouver Island are increasing. The humpbacks seen and identified has risen from approx two animals in 2002 to over 50 catalogued in the past couple of years. Every whale tail we see is a beacon of hope for this beleaguered species and for its entire kin.